In November 2011, as part of my Thailand trip, I travelled to Chiang Mai (located in Northern Thailand). The northern part of Thailand is regarded as very lush, culturally diverse and very chilled out.

On one of the days we ventured outside the city proper and travelled to the Maesa Region – Located just west of the city, past doi suthep lookout. We hired a driver for the whole day and visited an assortment of sights and other off the tourist trail places. 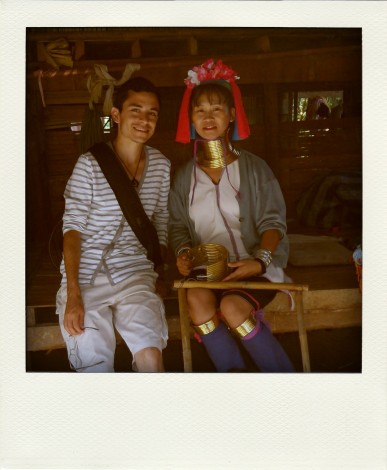 I’ve visited the the Maesa area of the countryside twice (2009 and again on this trip in 2011). It’s very picturesque and includes well known attractions like Queen Sirikit Royal Botanical gardens, Orchid farms and also the Baan Hmong Maesa agricultural village.

We arrived at the village and as it was my second time I felt like the place was very familiar to me. The village hadn’t changed drastically and I recall some familiar faces, whilst I was strolling through. Entry to the village is allowed by paying the entrance fee – with the proceeds mentioned to help the villagers’ infrastructure (although many would argue that a large chunk of it ends up in wealthy pockets). The village is run as an initiative by the Thai government (part of plan to make the people self reliant and self empowered to create their own successes) and is well visited by tourists to Chiang Mai. Forgive me if the name is incorrect (my research and remembering the name is a bit sketchy), but the Baan Hmong Maesa Agricultural village although is not really off the tourist trail, but gives an interesting insight into the lives of the many different village minorities that make up the Northern Thailand area. Even though it is not regarded as 100% authentic or genuine, the people i met whilst strolling through the village are captivating and friendly, to say the least.

As you wander around the village, you pass through the areas of different ethnicities, represented by signage. At first it’s a bit awkward strolling through the villagers homes and feeling like you are intruding in their lives, but they seem to be well accommodating of the tourists that pass by each day. The villagers vary according to their cultural background and this is reflected in their clothing attire and goods they have to sell. This ranges from hand woven goods textiles, hand woven plant ware and also other trinkets and gifts – your purchase helps them to make a living. 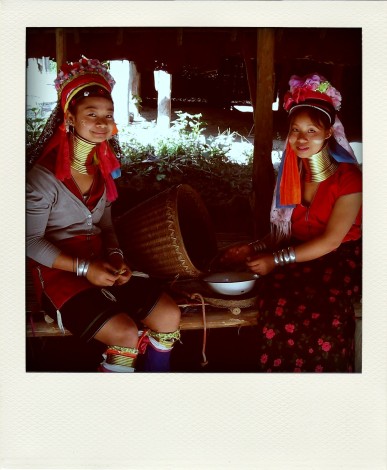 Passing each house in the village bring about an greater appreciation of living simply and living authentically. The villagers aren’t hindered by the temptations of the fast paced modern lifestyles and instead vary from growing their own crop to spending quality time with their family. How do they make a living you ask? When we were there we noticed a lack of male villagers and we were told that they had gone out to work, away from the village. It was mentioned that they return each day, bringing back the earnings of the day to their loved ones. Obviously they may have challenges to make a living, but really it comes down to what we need, rather than what we want. That’s’ the pitfall of our modern lives and what I admire most about my experience to the village.

With camera in hand, I went around and politely requested some photographs of the local villagers and their unique landscape. I was greeted with happy smiles and a ‘Linga Franca’ like understanding of the body language that was shared in our communication. No words were said, only some apprehension and the sense of respect.

The village is like a haven, where the kids walk around confidently and without fear. On our visit in 2009, we came across a young toddler who was roaming around by the rice paddies with a can of soft drink. The mother was nearby watching from a distance and as we approached the little toddler greeted us with a wai (Thai hand greeting) and we politely returned the same. We couldn’t resist a picture with the young toddler, as they were wearing the most elaborate attire in the village and they were fearless in their approach to us.

At the very same spot in our 2011 visit, we encountered grazing buffalo wandering the rice paddies, where they seem indifferent to the tourists that were passing close by them. For such a beast of an animal, it was surprising how placid and gentle they were. We wandered into the Karen tribe area – most notable for their metal coils around their neck. We were shown an example of the weight of the coils and they were definitely heavy! In their culture the long necks are a sign of immense beauty, so the coils act like a vice stretching the womens necks. We were told that young girls start this when they are very young and each year the coils are replaced and refitted to meeting the growth needs. 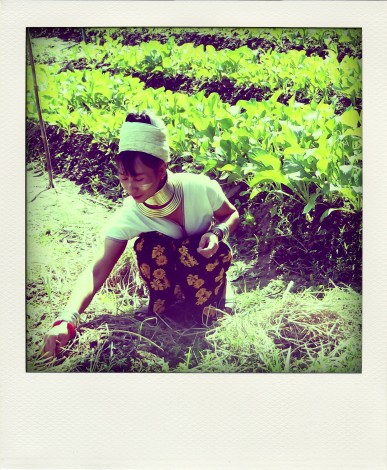 We were shocked to find out that if the women suddenly decide not to wear the coils, that their necks are so reliant on the coils, it would make the necks collapse – creating major health issues and even death. So once the coiling process starts, they are pretty much held to at least maintain the lifestyle. It’s a very unique look (similar to how the African tribes have the giant earlobes) and very challenging for the ‘long neck’ women to have some sense of conformity if they are to go out to the bigger cities, in amongst the Thai locals.

At one of the Karen villagers’ huts, I was beyond surprised when they responded back in clear English to my greeting of hello. The mother of three proceeded to engage in a conversation with me so effortlessly and with such poise. Her children were around the hut and the youngest in a tub in front of her. I asked to the lady how she learnt to speak this excellent level of English and she responded in detail explaining that it was learnt by listening to the tourists (who would speak in English) who would visit. The lady didn’t know how to write in English but could read, and gained the skills by reading some English development books which were given as a gift. The resourcefulness and initiative of the lady was so inspiring and really makes you feel motivated to achieve more in life. With the little resources she had, they made the most of the opportunities that was presented in front of them to try and create a better life.

I felt compelled to have a lasting photo with this amazing lady, to remember this unique experience I had. Still to this day I feel compelled to help her by providing English language books – and I still look forward to making this possible by contacting the appropriate channels. I left giving her a hug and the gratitude of being in her presence – it’s one of those memories that will always remain with me.

Proceeding through the village, I then came across a busy female villager tending to their corn crop in the fields in close proximity to the path. They didn’t speak any English but again the body language was more than enough to build rapport and a connection. They showed me their flourishing fields of varying crops – helping to support their aim at being self reliant and maintain some level of food security in the village. The lady was very poised in her manner and encouraged me to take a picture of her lovely fields and what she has grown. They were not fussed at all and even offered some of their vegetable crop to me – ever so generous in their nature. I left them to tend to their fields and proceeded along. 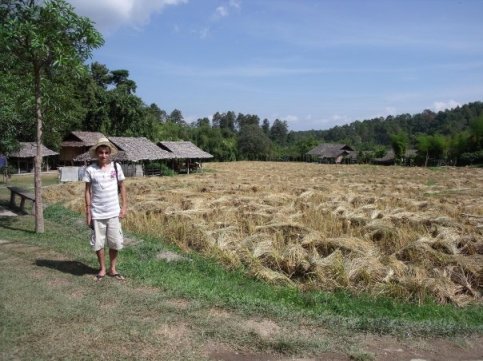 After this encounter, walking through the rest of the villages there were happy people relaxing in hammocks underneath their homes – taking retreat from the scorching heat. Many saw my camera and immediately knew that I was keen on capturing the moments within the village. They were all too happy to smile and show off their quaint homes and surroundings.

My experience at the village was very rewarding to say the least and there were definitely many memories from my visit there to inspire me into the future. My appreciation of living simply and especially to grow crops has grown immensely, and also seeing the rewards. Many life lessons which can be transferred into modern lifestyles – including mine for sure.

This site uses Akismet to reduce spam. Learn how your comment data is processed.